The Armenian College and Philanthropic Academy, Calcutta 1821 to Present Day.

This story is brought to you with the support of the
AGBU UK Trust.

In tribute and celebration of the 195th anniversary of the Armenian College and Philanthropic Academy in Kolkata. Remembering the first Headmaster, Arratoon Kaloos and a selection of others associated with the school.

A great deal has already been written about Arratoon Kaloos and it is not my intention to repeat it all here.  Suffice to say he was born in 1777 in Tokat in Anatolia, he started the first Armenian school in Calcutta in 1798[1]. (Mesrovb Seth’s “Armenians in India” can be downloaded here https://archive.org/details/ArmeniansInIndia_201402)
Arratoon was passionate about education and he was one of several Armenians in Calcutta who came together to create the Armenian College and Philanthropic Academy.  More on the history of the ACPA can be read on their website. http://www.armeniancollege.edu.in/about-us/.
What is perhaps much less known about him is that he was one of the earliest financial contributors to the Armenian Church in Singapore. The Will[2] along with the Estate Accounts of Arratoon Kaloos clearly show that he was a named subscriber to the building and subsequent completion of the church. 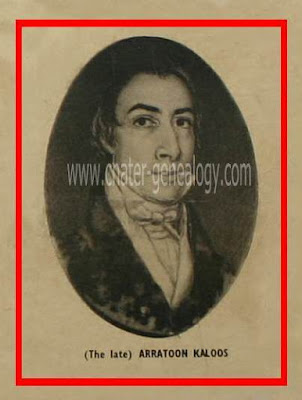 "11 April 1834 to cash paid to Mr. P Jordon the deceased's subscription to the completion of the Armenian Church at Sineapore (sic)."

This is the first time I have seen written in any estate accounts evidence of the support Calcutta Armenians, and in particular a named individual, gave to the community in Singapore for the erection of their own church. Normally a generalisation is made in reference material that the Armenian communities in Calcutta, Java and Singapore raised the necessary funds.

Arratoon Kaloos had been the head master of the Armenian College during the first years of its inception and it can be seen from his will and supporting accounts that he was a generous man of heart and mind. As well as supporting the school and the church, he and his wife adopted a child and brought him up as if he was his own. Ever grateful to Arratoon Kaloos for his kindness in offering him a home, the child Arratoon John Agacy, went on to marry and have children one of whom he named Kaloos in his honour.

In his Will dated 9th February 1832, Arratoon Kaloos left a legacy specifically to the Armenian College. “To the Managers, for the time being, of the Armenian Philanthropic Academy in Calcutta, in trust, to be applied for and towards the maintenance and education of the indigent Pupils of the said Academy the sum of two thousand Sicca Rupees. Rs2000.0.0.”

The estate accounts indicate a small amount of interest had been made on the original legacy.

Another founding member of the Armenian College and Philanthropic Academy in 1821 was Aviet Agabeg. Rarely remembered these days as one of several who changed the life path of so many, his obituary reflected his loss as well as his achievements.  Unlike others such as Arratoon Kaloos, Aviet Agabeg[4] did not leave any legacies in his will to the Armenian College, preferring to ensure his wife and children inherited his estate. During his lifetime Aviet was a staunch backer and supporter.

It should be remembered that Sir Paul Chater (or simply Paul Chater as he was then) took the bold step to bring six Armenian College students over from Calcutta to Hong Kong in 1899. Knowing that he could make a difference to peoples’ lives, he gave them commercial opportunities that would otherwise not have been available to them. Although Sir Paul never attended the Armenian College and Philanthropic Academy in Calcutta (his preferred school was La Martiniere in Calcutta), by investing personally and professionally in the future of six young students he demonstrated that he did indeed have very fond memories of the Armenian community in Calcutta where he once roamed as a bare foot orphan boy himself.

Chater suggested they give up their studies earlier than planned and take advantage of an offer he was making to them to emigrate with him to Hong Kong and fill jobs he had obtained and held for them at the Post Office in Hong Kong[5].

The students in question were:


They all arrived in Hong Kong in late 1899.  A coincidence in this small story is that they took the ship "Lightning", which was the same ship Chater sailed on in 1864 when he left Calcutta for Hong Kong.  Chater, an Indian Armenian pioneer in 1864 facilitated more Indian Armenian pioneers 35 years later.  The ship belonged to the Calcutta based Armenian company Apcar & Co, and thus the promise of a new life and prospective fortune was instigated and carried out by Chater and Apcar. Both, who were influential in their own right in the Far East, having paved the way for further Armenian settlers to seek their fortune in the Fragrant Harbour and also keeping it nicely within the Armenians of Calcutta community.


The students all took up their positions obtained for them by Chater in the Post Office in Hong Kong.  Five of them are listed in official papers of the colony[6].  They were all earning $40.00 per month with a $4 sorting allowance.  None of them stayed long in the Post Office, all of them ultimately making a good living, particularly Tigran Matthews Gregory.  Tigran started his own company T.M. Gregory & Co of which he was sole proprietor and he was also a well connected and established diamond merchant in Hong Kong during his lifetime.  Without that first leg up from Paul Chater, Tigran Matthews Gregory would not have been in a position to donate to the Armenian Church in Calcutta so generously upon his death, Tigran died in Hong Kong in 1962 and is buried in the same cemetery as Sir Paul Chater.  Thus, the Armenian Church in Calcutta acquired further generous donations which, ordinarily it would not have received but for Sir Paul. 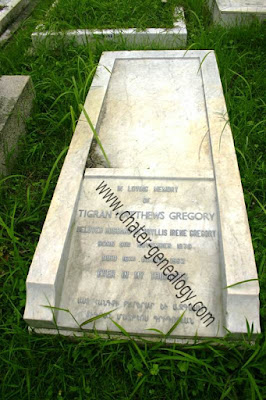 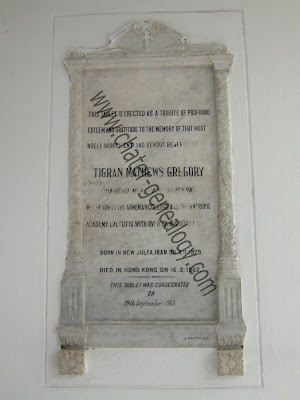 Nazareth Malcolm Manuk joined the Post Office briefly in 1899 but quickly obtained a position with the Chartered Bank of India.  After about 18 months he then joined The Dairy Farm, a company that Paul Chater had helped to start. Within a year of joining in 1905 Malcolm (who dropped his Christian name of Nazareth to fit more easily into the British establishment), was promoted to Secretary of the Company a position which showed that he was held in the highest esteem for his business abilities.  Malcolm dedicated 27 years of his life at the Dairy Farm Company and its rapid progress was in no small measure because of his responsibilities.  During WW1 he served in the Hong Kong Volunteer Corps in what was known as the Right Section Machine Gun Company.  He was well liked and thoroughly efficient.  He was also an extremely good marksman and won many shooting trophies.

Malcolm took a keen interest in theosophy and was the Presidential Agent of China of the Theosophical Society in Hong Kong where he often gave lectures.
The six men had a long and close friendship for the rest of their lives and in particular Malcolm Manuk and Tigran Matthews who later became his brother in law because Mrs. Gregory was Mr. Manuk’s sister Ripsey.  Malcolm Manuk died in Hong Kong in 1932[7].

After three years at the Post Office, Stephen M. Joseph felt confident enough in himself and his abilities to try his luck in Shanghai, but perhaps youthful exuberance, or slight immaturity held him back and he wasn't as successful there as he would have liked.  However, undaunted and unbowed, he left for Japan with one of the original six friends, and he secured a job with an American firm.  S.M. Joseph lived in Japan for 23 years and became extremely successful.  However, his brother, Abraham Joseph had a Shellac business in Jhalda and asked Stephen to join him.  He left Japan for India with approximately a lakh of Rupees in his pocket but tragically just prior to his leaving, he learnt of his brother's death by drowning which happened in 1927.  Shortly after this the big depression in trade set in and in 1930 all his savings where lost.  Stephen Joseph was now in serious financial difficulties and facing great hardship.  He received a letter from one of the original six friends that he had travelled to Hong Kong with from Calcutta, and who had heard of his hard times, the letter contained a job offer with a firm in Bangkok.  He immediately took the offer up and left for Bangkok to start his life all over again at the age of 60.  He became a successful businessman there.

Mackertich Cyril Owen, (known as Mack Owen) after his time at the Post Office, took a position as an assistant with the well known firm of A.H. Rennie & Co., Mack married in March 1909 at St. John’s Cathedral, Hong Kong to Phyllis Seth the daughter of the Court Registrar of Hong Kong, Arathoon Seth and his wife Catharine.  Arrathoon’s family was originally from Madras.

Other Armenians from India who settled and worked there during the lifetime of Paul Chater were Owen Elias Owen, Enos Seth, Harold Arathoon Seth, John Hennesey Seth, Seth Arathoon Seth and Aratoon Vertannes Apcar[8], to name but a few.

That friendship of six Armenian College students was solely due to Sir Paul Chater bringing them together, spotting their potential and giving them the chance of a lifetime to make something of themselves.  They in turn held each other in the highest regard all through their lives; that bond of friendship forged on the decks of the "Lightning" on that long journey between Calcutta and Hong Kong was etched in their minds for life.

Over the last 195 years the Armenian College has turned out numerous students who have made a difference in the world one way or another. With some patience and persistence one can find references to students and ex students in newspapers, journals, periodicals, institutions, repositories and libraries.

Congratulations Armenian College & Philanthropic Academy on your 195th anniversary, may you have many more years of education and celebration in front of you.