A Twelve Year Serendipity Due To A Mistaken Identity

In 2005 I received an email from someone asking me how life was in Kenya. It recounted the latest news as if I, the reader, should know exactly who and what was being written about.  I politely replied that I thought they had messaged the wrong person as I did not know any of the information or names they had mentioned. It was the equivalent of a ‘wrong number’, but if it had been a telephone call, it is very unlikely that a conversation thread would have gone beyond “sorry, wrong number”. However, I think sometimes ‘wrong e-mails’ are actually a more welcoming medium, it is much easier to strike up a conversation with an anonymous person where voice, accent and intonation cannot be judged. Naturally, the return reply to my email was an apology and an explanation of how such a mistake could have happened. The email was from someone who shared my surname, and of course a natural conversation thread was bound to follow.

A few weeks later his daughter wrote to me saying they had a cousin “3 times removed (or something like that”.) Her name was Penny Gatehouse and she owned some interesting items inherited from her late husband’s family whose ancestor had been Sir William Robinson, Governor of Hong Kong.  Hong Kong is where Catchick Paul Chater made his name and fortune, and I was aware that Sir William’s life and Paul Chater’s overlapped.  (For instance, they jointly co-ordinated the Diamond Jubilee celebrations in Hong Kong in 1897 honouring Queen Victoria, Sir William having appointed Chater as chairman of the organising Jubilee Committee.) The email went on to say that Penny would love to hear from me, I wasted no time and made the call.  What a delightful lady she was. As luck would have it, she was only about 30 minutes from me, and we made arrangements for me to visit her the following week.

Penny’s home was in the old market town of Lymington, a stones throw from the sea but still right in the heart of the New Forest on the south coast of the UK. She was a very spritely 86, full of verve, enthusiasm and wonderful stories. Penny spoke about her late husband and  how they ran a family business together, her conversation jumped around a bit, she interrupted herself with a sub-plot to a story, sometimes two sub-plots, her mental agility kept me on my toes. As she began to retrieve items of interest and photographs, she became more animated and I was kicking myself for not recording everything she was telling me. She was pretty well pulling cupboards and drawers apart showing me various beautiful antiques and items of interest.

But the pièce de résistance was a stunning Chinese silk embroidered scroll. It had been presented to Sir William Robinson on the day of his departure from Hong Kong in 1898 where he had served as Governor for 6 ½ years.

It was so long she didn’t have enough floor space to roll it out and nowhere high enough to hang it in a straight line.  Penny was eager to show me the whole thing, so, without missing a beat, she hopped up on the bed and hung it on a picture hook high up on the wall.  We then carefully unrolled it down the wall, laying it flat on the bed, it must have been 12 feet long.

What is that well known phrase?
Ah yes…….Shock and Awe.

The embroidery was simply stunning. It was in magnificent condition and the colours were still bright and fresh as if it had only recently been completed rather than being over 100 years old. We both bent over and closely examined it. Penny was scrutinising its condition after so many years of it being tucked away in its protective case. I, on the other hand simply couldn’t believe the beautiful craftsmanship and minute detail that lay before my eyes.

Penny and I had two different reactions but we were both in complete unison when it came to the magnificence of such an incredible and historically important piece of Hong Kong history. Before my eyes lay unseen history, in fact it was UNKNOWN history –no one apart from the family, knew this beautiful parting gift given to Sir William still existed. It was, and still is, a privilege for me to be the first person outside of the family to see this superb and exquisite creation.

By all accounts, this was turning in to the most perfect day.
And then Penny said:   “……but there’s more, do you want to see his medals?……” There was of course, no question that I wouldn’t want to, and in a trice Penny guided me to the framed honours board.

Officially, my breath was taken.

Therefore, presented here for the first time and never before seen in public, is what Penny affectionately called The Robinson Tribute as well as the privately held collection of Sir William's medals and honours which are lovingly kept and displayed by the family.

Shortly after my visit to Penny, I created a separate page on my old website for Sir William Robinson and The Robinson Tribute where I uploaded a couple of photographs.  It wasn’t long before they were attracting a lot of attention and a number of people messaged me concerning the embroidery. “Was it on public display?”, “could I put them in touch with the family?” “could they have pictures?”, “where did you find THAT?”,  “does anyone in Hong Kong know about it?” “where will it end up?” And so many more. Penny had made it perfectly clear that it was a family piece and will continue to be inherited down the generations of her family.

Knowing that the embroidery was of great historical significance, particularly to Hong Kong, I had also uploaded some of the images to gwulo.com a website dedicated to finding and preserving anything of historic value related to Hong Kong in a digital format. I also sent photographs to the Hong Kong Museum of History.

Five years after that in 2011 the Hong Kong Museum of History made contact with me  again and said they liked the photographs and would like to look into the possibility of using the scroll in an exhibition.

By this time, Penny had become frail and was no longer interested in enquiries. However, I gave the museum as much background information as I was able to.

I agreed to post a letter to Penny on their behalf, which I duly did.

The museum was keen to hear if Penny had replied, and asked me only a few days later if there was any news.

By now Penny had had enough and I had to inform the museum of my conversation with her. it was of course very disappointing news. Having received the letter, Penny telephoned me and advised me that she no longer had any of the items, that all had been passed to her sons.

This was the end of the journey.

The museum once again contacted me four years later in 2015 with the exciting news that there were plans to renovate the permanent exhibition of 'The Hong Kong Story'. My posting on the gwulo.com site(http://gwulo.com/william-robinson-hong-kong-governor) had reminded them of the scroll's existence and what a gem it was. Again, I attempted to help them.

Given the age that Penny would be by now, (potentially in her mid 90s) I was not expecting her to still be at her home in Lymington.  I carried out some local research once more, and notified the museum that although she had given the items of interest to her sons a few yeas ago, I had also discovered that Penny had sadly passed away in 2013.

What I was able to do was find and make contact with Penny's son, I made a phone call, explained who I was and asked them if they minded if I could put them in touch with the museum. They agreed.

That day I felt I had really achieved progress, I had successfully connected the family with the museum, and duly introduced them via email.

In 2017 after much deliberation and soul searching, Penny’s son agreed to sell The Robinson Tribute to the Hong Kong Museum of History for their archive and display use. It will at last be featured in all its full glory as well as maintained and preserved for many years to come.  I feel honoured and proud to have had a part in the instigation of this acquisition by the museum of an item of great historic significance that quite simply, no one knew about.  I would imagine it was a difficult decision to make for the family but the future of the embroidery is secure, and that is very pleasing.

I believe it will eventually, be put on display as part of the permanent exhibition of Hong Kong’s history. It is likely to be alongside the only other known existing silk tribute scroll that was once presented to Sir Frederick Lugard. He was given his Chinese silk embroidery in 1910 at the time of his departure from Hong Kong as the then Governor.  In 2011 it too was gifted to the Hong Kong Museum of History by the respective Lugard family members.  To possess both beautiful silk embroideries must be one of the most exciting things for the museum in Hong Kong.

And to think it all started because someone asked me in an email “How’s life in Kenya?”

This was indeed a 12 year serendipitous journey.

Hon. Dr. Ho Kai then handed the address to his Excellency and said: “The original has been sent on board, being of a very bulky nature.  This is the bill of lading and the key of the box and photograph of the address.”

There were two other addresses presented to Sir William at the time of his departure, one from the Hongkong community as a whole and the other from the Parsee community. The presentation of all three addresses were made in the St. George’s Hall and Sir William arrived punctually and was received in front of the City Hall by a guard of honour consisting of the men of the Hongkong Regiment.

Acknowledgements:
My thanks once more to the late Penny Gatehouse and her family for sharing their private collection with me.
Posted by Chater Genealogy at 11:58 No comments: 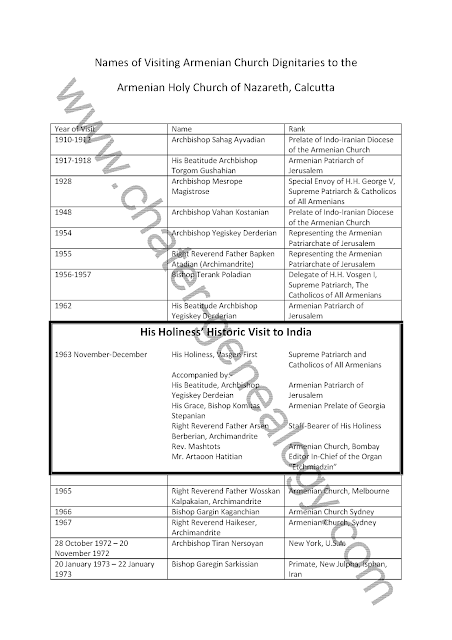 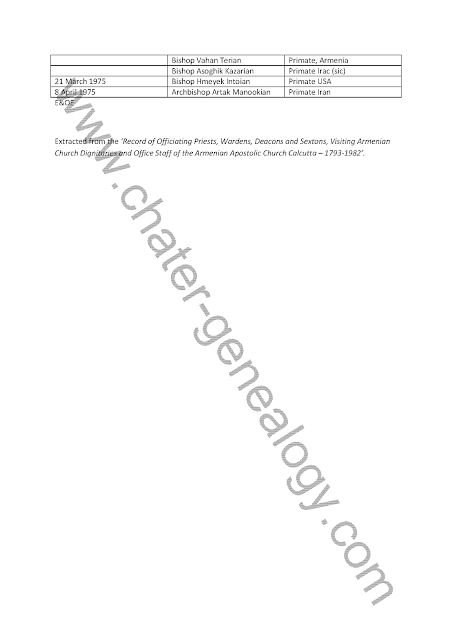 List of Wardens of the Armenian Holy Nazareth Church, Calcutta 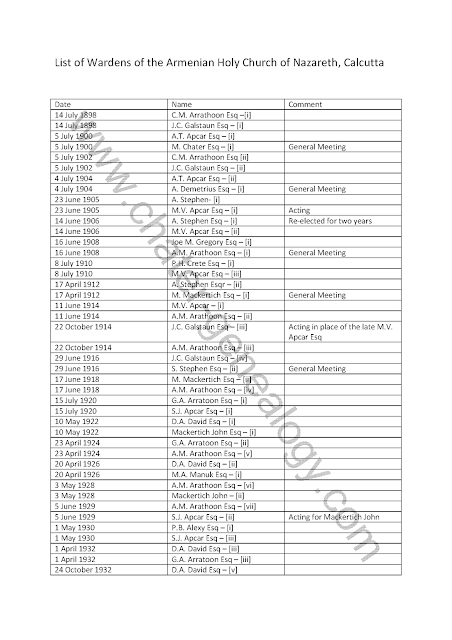 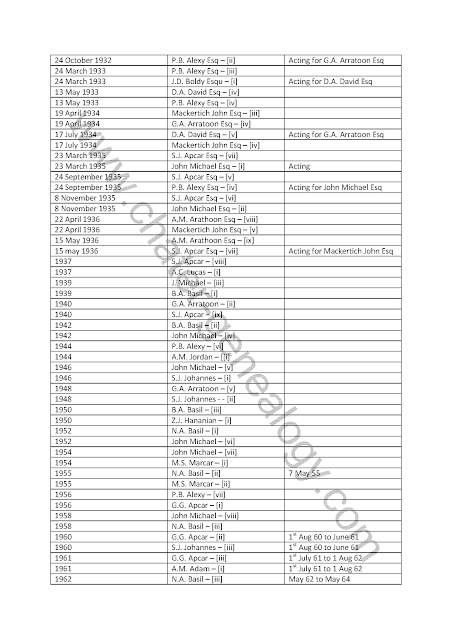 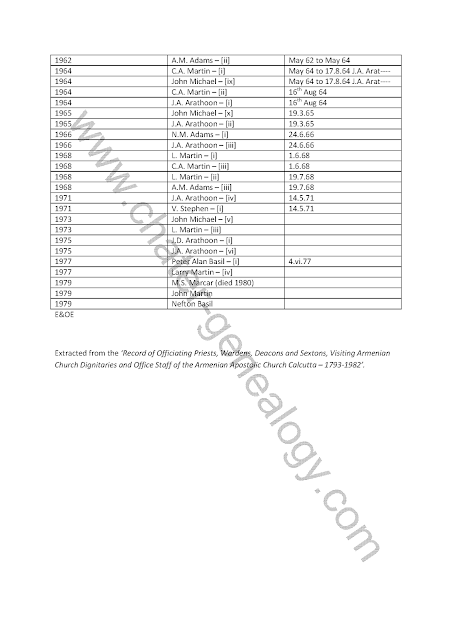 Names of Deacons and Sextons at the Armenian Church, Calcutta 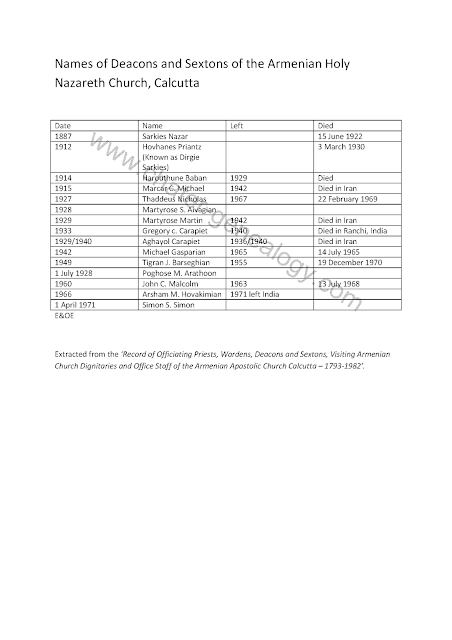 List of Office Staff at the Armenian Church Calcutta 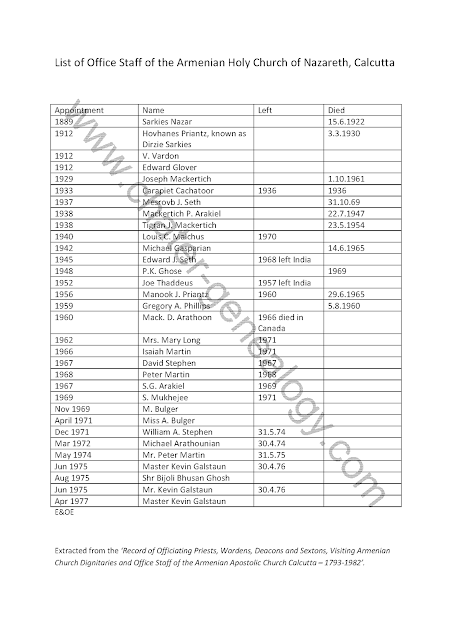 My thanks to George Aghjayan for sourcing the films.