The Conundrum That Is Indian Armenian Surnames


The genealogical nightmare that is Armenians.


Ter Carrapiet Ter Abraham Ter Carrapiet (yes, this is ONE person) had 3 brothers and a sister as well as 2 sons and a daughter.


Two of the brothers’ last names were Ter Carrapiet but one brother had the last name of Ter Abraham.


This has to be one of the longest and complex naming strings that I have come across in the Armenians in India.

Posted by Chater Genealogy at 20:21 No comments:

Khojah Petrus, The Armenian Merchant – Diplomat of Calcutta from 1756-1763


This is an original paper on “Khojah Petrus, The Armenian Merchant – Diplomat of Calcutta from 1756-1763”. It was read by Mesrovb Seth at the 11th meeting of the "Indian Historical Records Commission" held at Nagpur in December 1928. The contents of this paper were included in his later book "Armenians in India..." published in 1937 minus the photograph.

What is unique and original about this particular document is the personal dedication written by Mesrovb Seth to Jordan Martin Esq., whose wife, Elizabeth Catchick was the 2xgreat grand-daughter of Rev. Haruthiun Shumavonian of Madras who published in 1794 the first known Armenian newspaper, under the name of the "Azdarar". The dedication reads: “Jordan Martin Esq., with the author’s very best regards. 15.3.29”.
Posted by Chater Genealogy at 19:22 No comments:


Extracted from “The Literary Panorama by Charles Taylor, 1807”

Supplication for Rain by the Armenian Christians.

The uncommon series of dry weather in the district of Madras gave occasion to solemn service in the Armenian Church at Madras on Sunday November-- 1806.  After the customary Mass, prayers were read, and the Rev. Arathoon Simeon, the Vicar, in a short discourse from Kings xvii.1.xviii.1.43.44.45. Isaiah i.5. “ I will command the clouds that they rain non rain etc” stated instances and reasons of similar visitations with which Providence chastised corruption of morals, and neglect of religious duties in the days of the prophets, exemplified the contrition and conduct of pious men of old, and exhorted his audience to penitence and supplication.

After this, a Hymn, commencing  Turn thy wrath from us they earthly creatures: benevolent Lord, spare and do not let us perish etc was sung, kneeling before the altar, with every mark of humility and devotion.  This was followed by an appropriate prayer, and recital of Psalm vi.xxxiii.li.cii.cxxx.cxliii. the whole concluded with the Lord’s Prayer: in which the sentence  thy will be done in Earth as it is done in Heaven, was emphatically repeated by the Vicar, to which a feeling chorus of Amen was audible from the whole congregation.  In their own country the Armenians perform this service on such occasions, in the fields and arid plains.
Posted by Chater Genealogy at 18:15 No comments:

The British merchants resident in Calcutta are a respectable and enterprising class of men, many of whom are possessed of large and independent fortunes, in the acquisition of which they have displayed those merchant talents, and that enterprising spirit, which are the characteristic of the British nation.  The following are the principal houses.


The Armenians are considered the most numerous body of foreign merchants in Calcutta; they carry on an extensive commerce with all parts of India and China, and are extremely diligent and attentive in business.  They are considered to have the most accurate information from other parts, of any body of merchants.  The principal houses are

Posted by Chater Genealogy at 17:40 No comments: 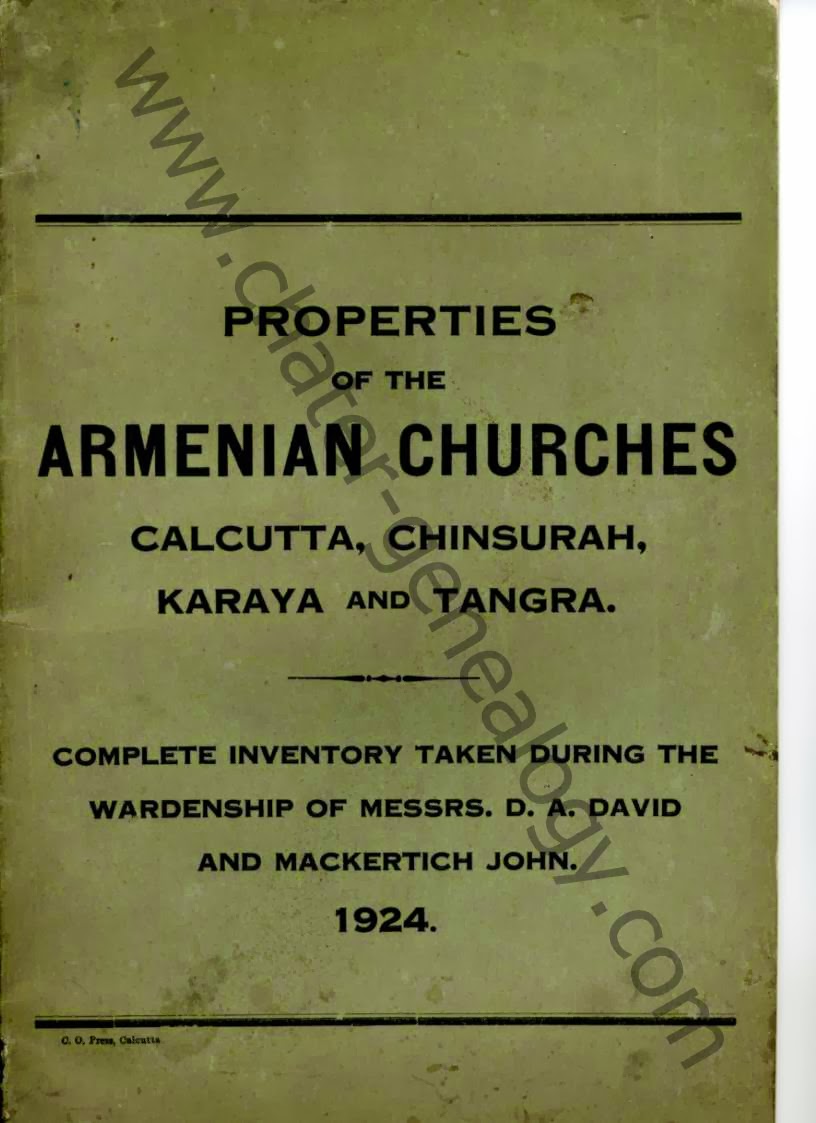 Full transcription of this publication can be found here
http://freepages.genealogy.rootsweb.ancestry.com/~chaterfamilytree/History_Armenian_Church_Calcutta_Inventory.html

Posted by Chater Genealogy at 17:15 No comments:

Exceptional provenance with this item. These carpets were presented as a gift to the King of Afghanistan in 1855 by the then Shah of Persia. The carpets were sold to an Armenian gentleman in Calcutta in 1933 by the King of Afghanistan's grandson with provenance letters below. In 1935 the Armenian gentleman offered them for sale to Her Excellency Countess Willingdon in Calcutta.


Posted by Chater Genealogy at 15:42 No comments:

The Arathoon Nicholas Story of the Missing Millions

This is another of my occasional reviews concerning Armenian family history. A story of great riches, unpaid legacies and inevitably great disappointment, of women, legitimate and illegitmate children, a woman scorned, a spell in jail, desperate insolvency, a dishonest apprentice and a priest whose head was turned by the contents of a will.

Various documents are slowly being brought together that fleshes out the story of a vast fortune now lost somewhere.

Arathoon Nicholas, son of Nicholas Arathoon Nicholas was born in Julfa around 1807. Like so many Armenians he travelled to India in the hope of starting a business and enriching his life. In 1832 he married Khachkhatun Hyrapiet in Calcutta and they went on to have 8 children, 4 boys 4 girls. During this marriage he had a relationship with a woman called Anna Catchick Ter Astwachatoor. Exactly what her personal circumstances were are unclear, but no marriage record can be found for them. They did however have a son whom they named Tegran Arathoon Nicholas born in 1841. Meanwhile his wife Khachkhatun died in 1858, no formal union appears to have taken place with Anna. In 1883 Arrathoon married the widow Varvar Lucas nee Sarkies with whom he went on to have two daughters.

Arathoon’s fortunes do not appear to have gone successfully as he can be found in government gazettes applying to the courts in Calcutta for relief in December 1855 his occupation listed as River Merchant. It would appear from original documents I have obtained of the insolvency order (see image Nos. 1,6,7 & 8 ) that not only was he applying for relief, he had been in jail since October of that year brought about by Anna the mother of the illegitimate Tegran above for unpaid debts.

He tried and failed to get court protection from arrest in respect to the debts he owed and hoped that he would be allowed to appear before the court to plead his side. He was refused and remained in jail, how long for is unclear.


His two eldest sons by Khachkhatun, Nicholas and John both die as children aged 5 and 16 repectively. His youngest son Astur died at the age of 22 leaving only one legitimate son Nicholas Arrathoon Nicholas and the illegitimate son Tegran Arathoon Nicholas. These two half brothers became engineers. They worked together on the ship the SS Scotia, Tegran as the chief Engineer and Nicholas as the 2nd engineer. On the 17th June 1876 they were sailing the ship from Calcutta to Penang delivering her to new owners, the ship must have hit a storm it never made it to Penang and nothing was ever heard from her again. All perished.

Arathoon Nicholas now did not have any male heirs.

Jumping forward 70+ years
A story of a vast lost fortune was the talk not only of Calcutta but of Julfa too.

In a letter written by Mayill Jordan to his nephew Johny Jordan dated 20th June 1947 Mayill explains to him about a lost fortune and how, with Johny’s help they could help recover it and earn themselves a portion for their trouble.
(See Image No. 9 - transcription of image is below)


“Now dear old Johny there is a more important and profitable matter which I would like to explain to you as briefly as possible and ask your co-operation.

Image No. 2,3,4 &5 show that T.A. Zachary a nephew of Arathoon Nicholas was trying to enlist the help of the US government to track down his rightful legacy to “millions of Pounds and property”.


It would seem that after his spell in jail Arathoon Nicholas turned his luck around, and if we are to believe the above story, became a wealthy man. But what became of him and his wealth and how and why did Amirkhanian think he had a fortune to leave in his will in the first place?

Unfortunately [at the moment] I have not been able to find anything about Amirkhanian, his presence in Penang (if indeed that is where he died) is eluding me. However I have the wills of both Tegran Nicholas and his father Arrathoon Nicholas.

Tegran made his will on the 16th June 1876 naming his two sisters Catherine and Regina as exectutrixes and beneficiaries of his estate inheriting the profits from the sale of his house in Bow Bazar street.

Arrathoon Nicholas made his will on the 27th January 1890 in which he devised and bequeathed all his property both real and personal to his beloved wife Varvar to enable her to look after their two daughters. Arrathoon subsequently died on the 29th January 1896 in Calcutta.

As far as I can tell, there never was a fortune; a holy grail pot of gold inherited by Amirkhanian from Arathoon Nicholas. For nearly 100 years “legitimate heirs” have been chasing the rainbow trail of Amirkhanian……does it exist? Who knows but Arathoon Nicholas does not appear to have left him anything.

Posted by Chater Genealogy at 11:13 6 comments: