The Oldest Christian Grave in Chennai is Armenian


This story is brought to you with the support of the
AGBU UK Trust.

Some of the oldest Christian graves and tombstones in India and Bangladesh are Armenian. 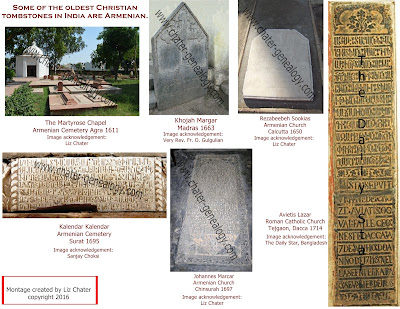 *NOTE: The hyperlinks in square brackets [ ] do not work in this blog, please scroll to the bottom to read the links.*


For many a tourist, the start of an afternoon’s visit to a small church in Chennai begins at the foot of a large flight of stone steps, leading on to the Little Mount Catholic Church of ‘Our Lady of Good Health’. Already they have missed a significant monument of historical importance, one that has been written about many times, but for some reason not popular enough to photograph and record as they eagerly climb up to visit the wonders of the church and its caves. The language is unfamiliar to many, the script tricky for locals to read; Armenian history is at their feet as the daily routines of people pass by.  It is the oldest Christian grave in Madras, and it is Armenian.

Forgotten.
But not any longer.

A record of the inscription can be found in at least two books, Mesrovb Seth’s ‘Armenians in India’ as well as a ‘List of Inscriptions on Tombs or Monuments in Madras’ by Julian James Cotton, but no images have so far made it in to the public domain.

Described as a milestone in shape, and perhaps maybe even mistaken as such in this busy city, the tombstone, dated 1663 of Khojah Margar, is one of a handful of the oldest Christian graves in India that happens to be Armenian. The others can be found in Surat, Agra, Calcutta, Chinsurah and Dacca respectively.

Armenian tombstones in Chennai can be viewed here

For those interested in knowing about the other centuries old Christian graves and monuments in India that are Armenian, here is a brief summary.

I expected the Armenian cemetery at Agra to be a little worse for wear and care, but I couldn’t have been more mistaken.  It is incredibly well preserved and conserved by the local Agra authorities, the grounds and shrubbery are well kempt and some of the stones and their inscriptions look as fresh and clear as the day they were carved.

Mesrovb Seth writing of the Martyrose Chapel said: “This Mausoleum which is not built of marble, like the world-famed Taj, is nevertheless the oldest Christian structure in Northern India. It was erected in 1611 at the old Armenian Cemetery”.

Agra Municipality are clearly showing their sympathies towards these beautiful historic stones and structure, making wonderful efforts in creating an attractive location for tourists to visit.

Although not the original stone, there is a marker inside the chapel remembering the earliest Armenian burial in Agra, Khwaja Mortenepus, 1611.

Armenian tombstones in Agra can be viewed here

Probably the most well known in the group of oldest Christian tombstones, is situated at the Armenian Church in Calcutta. A modern day plaque in English placed there in 1971 rests upon an 18th century intricately carved stone, bearing an inscription and date of 1630.  “This is the tomb of Rezabeebeh, the wife of the late charitable Sookias, who departed from this world to life eternal on the 21st day of Nakha in the year 15 i.e., on the 21st July, 1630.”

It is in the compound of the churchyard where other interesting tombstones and inscriptions can be found.

Armenian tombstones in Kolkata can be viewed here

The Armenian Church in Chinsurah is the second oldest church in Bengal. It was erected by the Marcar family. Johannes Marcar laid the foundation for the church in 1695. He died just two years later and was buried inside the church. Protected from sun, wind and rain, it is in wonderfully good condition.

The transcription is a combination of Mesrovb Seth’s work and present day scholar and historian Sebouh Aslanian to whom I am most grateful for his up-to-date translation: THIS IS THE TOMB WHEREIN LIES INTERRED THE FAMOUS QARIB [GHARIB OR STRANGER/WANDERER] CALLED KHWAJA JOHANNESS, THE SON OF MARCAR OF JULFA, FROM THE CITY OF SHOSH. HE WAS AN EMINENT MERCHANT, HONORED BY KINGS AND RESPECTED BY PRINCES. HE WAS HANDSOME AND AMIABLE AND HAD TRAVELED SOUTH, NORTH, WEST AND ALL THE FOUR CORNERS OF THE WORLD. HE DIED SUDDENLY, ON 27TH DAY OF NOVEMBER, 1697 IN THE EASTERN PART OF THE COUNTRY, AT THE CITY OF HUGLI, AND DELIVERED HIS SOUL INTO THE HANDS OF THE ANGEL AND RESTED HERE WITH NOSTALGIA FOR A HOME.

THE END OF THE WORLD SHALL COME, THE CROSS OF THE EAST WILL DAWN, THE TRUMPETS OF GABRIEL WILL BE BLOWN SUDDENLY IN THE MIDDLE OF THE NIGHT, THE SEAT OF JUDGMENT WILL BE SET UP THAT THE BRIDEGROOM SHALL COME AND SIT THEREON AND SAY "COME YE THE BLESSED OF THE HEAVENLY FATHER." AND MAY HE DEEM HIM [KHWAJAH JOHANNESS MARCAR] EQUALLY WORTHY LIKE THE FIVE WISE VIRGINS, TO BE IN READINESS TO ENTER THE SACRED PAVILION WHICH ONLY THE RIGHTEOUS THAT ARE ON THE RIGHT, CAN INHERIT.

OH YE WHO MAY COME ACROSS THIS TOMB PRAY FOR HIM EARNESTLY AND MAY GOD HAVE MERCI ON YOUR PARENTS AND ON ME, REVEREND GREGORY WHO AM A NATIVE OF ERIVAN. HERE ENDETH THE TRANSCRIPTION."

In January 1907 when Mesrovb Seth was travelling around India recording Armenian tombstones and gathering research material for his book, he visited the Armenian cemetery in Surat.  There he came across a tombstone of an Armenian lady who died in Surat in 1579 A.D.

"In this tomb lies buried the body of the noble
lady, who was named Marinas, the wife of the priest
Woskan. She was a crown to her husband, according
to the proverbs of Solomon. She was taken to the Lord
of Life, a soul-afflicting cause of sorrow to her faithful
husband, in the year one thousand and twenty eight of
our Armenian era, on the fifteenth day of November at
the first hour of Friday, at the age of 53.
Ye who see this tomb, pray to the Lord to grant mercy.”

Sadly, it would seem that this particular stone is no longer visible, or perhaps has simply been overlooked. The cemetery is being well cared for by the Surat Municipality and monitored by the Science Museum and I know the museum regularly check the condition of the stones. The staff are very proud and tremendously passionate about the treasures in their care. However this particular grave does not appear to be in their inventory.

The oldest surviving marker stone is in the Mortuary Chapel at Surat belongs to the late Kalendar Kalendar, carved on what looks like a piece of ancient wood, and, according to Seth says:

This is the tomb of Kalandar, the son of Phanoos Kalandar of Julfa, who departed this life on Saturday, the 6th day of March 1695.


Thank you Surat for the care and preservation you do for the remaining Armenian tombstones.

Armenian tombstones in Surat can be viewed here

Inside the Roman Catholic church (Note: Not the Armenian church) of "Our Lady of Rosary," at Tejgaon, two and half miles from Dacca, on the Dacca-Mymensingh Road, built in 1677, there are some old graves of Armenians who died at Dacca between the years 1714 and 1795.

The oldest Armenian marker in the cemetery is this one: “This is the tomb and resting place of Avietis the merchant, who was the son of Lazar of Erivan, whom may Christ and His Second Advent find worthy of His presence. In the year 1714 August 15[1].”

Referring once again to Mesrovb Seth’s ‘Armenians In India[2]’, he notes that,  “there is also an inscription in Portuguese, in which the date of his death is given “7 de Junho” (7th June). We cannot account for this discrepancy, but we are inclined to think that the date given in the Armenian inscription is the correct one, as the old Armenians were very particular about dates.”

It is sad that more of the very old Armenian stones and markers in India, Bangladesh and SE Asia have not survived the years, but at the same time we are very lucky that many still do survive and are falling under the protection of relevant bodies that recognise their significance in the combined history of India and Armenia.

Important historical graves exist today in the Armenian Church at Dhaka. My book, “Armenian Graves Inscriptions and Memorials in India: DACCA” is the first publication to catalogue in full the remaining tombstones in the Armenian language with English translations. For many years they were locked in the beautiful ancient Armenian language but accessible only to a limited audience. This book releases these astonishing inscriptions to the world-wide family history researcher and for the first time, allows them to trace their Armenian ancestry in Bangladesh.

To preview a selection of pages or purchase the book, please use the link. 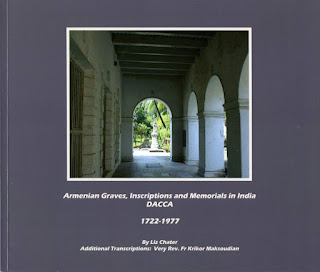 If you ever find yourself in Chennai, take a visit to The Little Mount but look for Khojah Margar before you climb the steps to the caves.
[1] Full transcription extracted from Bengal Past and Present short article on the Armenian Church of Dacca, 1916.
[2] Armenians In India P.571. For a free download of this out of copyright publication https://archive.org/details/ArmeniansInIndia_201402

Posted by Chater Genealogy at 14:22