It is already known and well documented that Scottish Theodore Forbes[1] and Indian-Armenian Eliza Kevork are ancestors of British Royals, Princes William and Harry respectively.

The royal line can be traced through Katherine Scott Forbes’s marriage to James Crombie and their children, all of which is well documented in various family trees on a number of genealogy websites. More recently a number of news articles published world-wide both in print and digitally, have explored the direct relationship with the Princes, and it is not my intention to investigate this genealogy line today.

However, scarce recognition (so far) has been given about the life and descendants of Katherine Scott Forbes’s brother Alexander Scott Forbes.

But first, not so commonly known is the fact that Theodore Forbes also had another son, not with Indian-Armenian Eliza Kevork but borne by a Scottish woman called Ann Macdonnell.

The child was named Frederick Forbes, and is acknowledged by Theodore in his Will[2] as “my respected son Frederick by Ann Macdonnell of Aberdeenshire”. Little Frederick was bequeathed 20,000 Bombay Rupees, only 5,000 Rupees less than Alexander, the son Theodore had with Eliza Kevork. Frederick was born in Scotland on 22 November 1808 and it would seem that after Theodore’s death, Frederick came under the care of his uncle (Theodore’s brother) Alexander Forbes and his wife Annabella nee Reid and their children.

Conveniently ignoring his illegitimacy, Frederick became fully absorbed into the Forbes family, and he went on to graduate from Marischal University in 1827[3]. In 1831 Frederick was nominated by his cousin, John Forbes (son of Alexander Forbes the uncle that took in Frederick)  for entry into the East India Company as an Assistant Surgeon[4]. His preparations for a military career didn’t quite go to plan. Having studied medicine for some time, The Royal College of Surgeons in London wrote that Frederick was “found to be unqualified for the situation” and was therefore referred back to his professional studies for a further six months. Frederick was finally examined and passed as an Assistant Surgeon in February 1832.

From the book: The Visit of Frederick Forbes to the Somali Coast in 1833” by Roy Bridges[5]: an explanation is give as to why: “…..Frederick found himself in the Gulf of Aden in the Red Sea in 1833 because his ship, the brig Tigris, had been ordered to Mocha to keep an eye on developments there as Mohammed Ali's campaigns against his nominal Turkish overlord proceeded…….

….at the time of his [Frederick’s] visit to the Somali Coast he was attached to the Indian Navy. His regrettably brief subsequent life shows that he was on the way to becoming a notable scholar-explorer. At this early stage he obviously had some hopes of travelling in Africa[6] but the accidents of his career led him to make expeditions in the Mesopotamian and Persian regions of South-West Asia.[7]”

Frederick’s thesis in 1840 on the “Nature and History of Plague as Observed in the North Western Provinces of India” gained him a gold medal awarded by the Faculty of Medicine of the University of Edinburgh. Touchingly, Frederick dedicated the book to his uncle 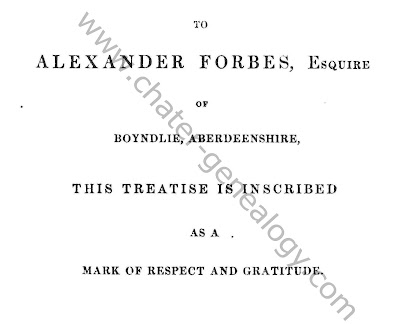 “Alexander Forbes, Esquire
of
Boyndlie, Aberdeenshire.
This Treatise is Inscribed
As A
Mark Of Respect And Gratitude”

Like so many about to embark into unknown territories, Frederick made a Will on the 3rd April 1841 in Tehran, Persia.  Witnesses were Frederick Hughes of the Madras Company and Syeed Khan.  Frederick appointed “Charles Forbes Esquire or the managing partner for the time being of the firm of Forbes and Company, Bombay, Alexander Forbes Esquire of Boyndlie [his uncle] in the county of Aberdeen, and James Crombie [his half sister Kitty Forbe’s husband and ancestor to Princes William and Harry respectively] now lately residing at Swailand of Elrick in the parish of Newmachar and county of Aberdeen, to be the executors of this my will.”

Frederick’s Will is also evidence of his blood relationship to Alexander Scott Forbes.

Frederick’s last bequest: “I give and bequeath the residue of my personal estate whatsoever or wheresoever to my said executors Alexander Forbes and James Crombie for their absolute use and benefit for and on account of the trouble they may have in the performance of the trusts of this my will, to be equally divided between them, their heirs or assigns.”

“Intelligence was yesterday received at Agra of the murder of Dr. Forbes, by Ibrahim Khan, the Beelochee chief of Seistan.  Dr. Forbes, under the protection of Mohumud Reza Khan, the most influential chieftain in Seistan, had completed the circuit of the lake [at Seistan] and visited all sites of interest in the province, accompanied by one Persian servant. From the residence of Mohumud Reza Khan he was escorted to Jehanabad, the fort of Ibrahim Khan, Beelochee, and after remaining with that chief a few days, he left for Sash, with a party of Ibrahim Khan’s horse for a guide.  The Khan joined him at a short distance from the fort; they breakfasted together in a friendly manner, and Dr. F. was immediately murdered. Our report says, that being attacked by a large hound brought out to hunt the hog, he shot it in self-defence, and the Khan in a moment of irritation immediately fired on him.  The other and more probable story is, that the Khan, on pretence of examining his arms, got possession of his gun, pistols, and sword, then immediately gave the signal to his horsemen, who seized the doctor, dragged him through the water of the lake until he was half-drowned, and when he was brought out, the Khan shot him with his own hand.  His Persian attendant was barbarously murdered a day or two after.[8]

Nearly 10 years with the East India Company, and he was dead at 34.

Alexander and Elizabeth Forbes’s son Frederick married Agnes Low Petrie 27 December 1897 in Arbroath[13]. Agnes was a working girl and employed as a flax reeler, her father was a hairdresser. Frderick and Agnes had 3 children, Elizabeth Ross Forbes born 1898[14], David Buik Forbes born 1903[15] and Ethel Agnes Forbes born 1904[16]. Frederick Forbes was a commercial traveller/shoe salesman, he died of pneumonia in 1909 in Arbroath[17], the death was registered by his brother-in-law Alexander Buik (who had married Catherine, Frederick’s sister in 1888 in Arbroath) leaving Agnes with 3 young children to bring up alone.

The vast fortune that had been left to Alexander Scott Forbes by his father Theodore in his Will of 21 September 1820 was diminishing, In the Will Theodore wrote days before his fateful demise: “To my respected son Alexander Scott Forbes by the said Eliza Kewark [sic] and now in India where it is my wish that he should remain, the sum of twenty five thousand 25, 000 Bombay Rupees.” A handsome bequest for the day.

By 1920, Agnes’s eldest daughter Elizabeth had struck up a blossoming friendship  with a fellow Scot, James A. Keith. He was a grocer’s assistant and in December of that year sailed from Liverpool to New York[18] with a view to starting a new life.  It is this innocuous migration of an unrelated Scottish lad that would end up influencing the remaining Forbes family to leave Scotland and start their own new lives in the land of the brave and the free.

On the 23rd June 1923 (Elizabeth) Lizzie Forbes sailed from Glasgow to Boston to meet James Keith, a month later on the 6th August James and Lizzie had married in Troy, Rensselaer, New York[19] a town which would become the home of the migrated Forbes whose roots where originally from India. Lizzie and Keith had two children, Ronald Bruce Keith born 1926 died 2006 and David Forbes Keith born 1929 died 1985.

Missing her daughter and with nothing to keep her and the two remaining children in Scotland, Agnes followed Lizzie to New York in September 1925[20], taking David and Ethel with her. The three of them took up residence in Stow Avenue, Troy, David found employment as a book-keeper whilst Ethel was a cashier.

In 1928 Agnes’s son, David Buik Forbes married a Scottish woman called Una Smith moving just a few houses away in Stow Avenue. David and Una lived in several locations but stayed in Troy for the rest of their days.

In September 1929[21] Agne’s daughter, Ethel married Alexander Smith a migrant Scot like herself. With David and his sister Ethel now married, Agnes moved in with James, Lizzie and their family, where she lived out her days, dying in 1939.

Agnes is remembered on a marker stone at Elmwood Hill Cemetery along with that of her son-in-law James Keith who at the time of his death in 1956, had been the manager of the Mohican Markets in Troy and Albany for 20 years. Agnes’s beloved daughter Lizzie Keith died in 1963 and had been an integral member of the Fifth Avenue Presbyterian Church choir for over 40 years[22]. Remembered on the same memorial is one of James and Elizabeth’s children David Forbes Keith.

David and Una Forbes had two children a boy and girl and thus continued the direct male Forbes descendancy from Theo and Eliza of Surat in India. David was a salesman for over 20 years with the Tetley Tea Co and heavily involved with community life in Troy whilst Una worked for the Denby’s department store and became a well loved and trusted member of staff.

It might come as a surprise that today there are living descendants in New York who share the same common ancestors of Princes William and Harry, Scottish Theodore Forbes and Indian Armenian Eliza Kevork.