The worst news possible. This type of War Office correspondence was not welcome during WW1. 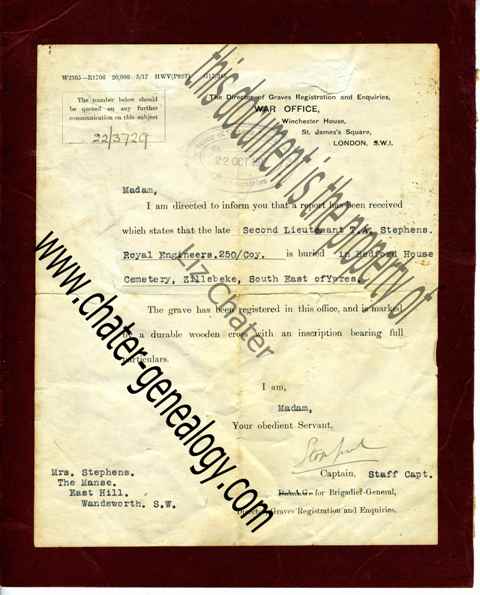 This is the original letter that T.A. Stephen's new bride Lydia received after he had died of wounds in Belgium in 1917. They had only been married two years.

Thomas Alexander Stephen, son of Armenians from Calcutta Stephen Simon Stephen and Catherine his wife. They had died prior to his joining the war effort.

Placed for sale as war memorabilia, I purchased it to save another small piece of Armenian history from being lost. Note the crunched up creases on the paper. Could this have been Lydia's reaction to the terrible news? The agony of her loss, the cast aside letter screwed up into a ball and thrown away in disbelief.

Carefully and lovingly smoothed out and fixed to a piece of cardboard and stored. A focus for her grief.

T.A. Stephen's grandfather, Simon Stephens was the first recorded marriage in the register of the Armenian Church Singapore and he was also co-founder of Apcar & Stephens.

To read a detailed account of Armenians in Singapore and Malaysia, Nadia Wright's book 'Respected Citizens' is a must. You may also find her other book 'Armenians in Singapore: A Short History' also of interest. Obtainable on the same link.
Posted by Chater Genealogy at 14:47 No comments: