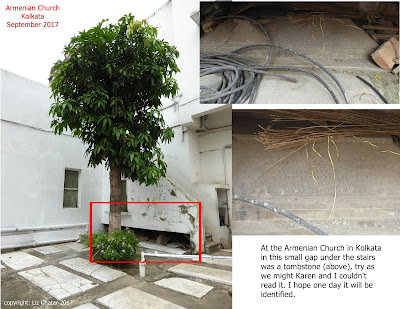 I was reminded today of a particularly frustrating tombstone transcription that I had been trying to unravel for some time.

I was in Kolkata in September 2017, visiting the Armenian Holy Nazareth Church. I had previously visited this church several times over the years, and had photographed all the tombstones in the church compound 10 years earlier with a view to helping people with their Armenian genealogical family queries. Most of them are now available on my website. However, this one was very well hidden, and I had missed it on all my previous visits. As can be seen from the photograph, it was recessed in a shallow alcove underneath some stone steps in a corner of the Nazareth churchyard. Initially it looked like an empty void; a storage space between ground level and the rising stairs. Crawling on the ground, I discovered these two forgotten graves. The gap was only large enough to reach my arm through. Hoping there was nothing in there that might bite, I blindly stretched my arm as far as it would reach, and leant on my eternal optimism that the auto-focus on my camera would not fail me. I had just one opportunity here. I was not able to view the images until I returned to my hotel in the evening. One had broken lettering, the other was completely covered by tools. Even with several people helping me, it was impossible to see the name on the stone with lettering.

It looked like a completely impossible tombstone to read, the angle was very difficult. Over many months I returned to these images regularly to see if I could make anything out. Enlarging, enhancing and occasionally tracing, until small fragments of words and dates slowly became visible. I finally managed to make out just enough to cross-reference the date and month of death with the same in my database, and almost two years later to the day in 2019, with some patience and a little persistence, I managed to unravel this closely covered stone. I had finally cracked it.

Sacred to the memory of Manuk Aratoon David.

Blessed are the dead who die in the Lord from henceforth; Yea, saith the Spirit, in that they shall rest from their labours; for their works do follow them.

*According to the Armenian Church baptism register for Kolkata, the 8th November 1815 is the date he was baptised. He is recorded as being born 22nd October 1815 in Kolkata.

Posted by Chater Genealogy at 10:11 No comments: