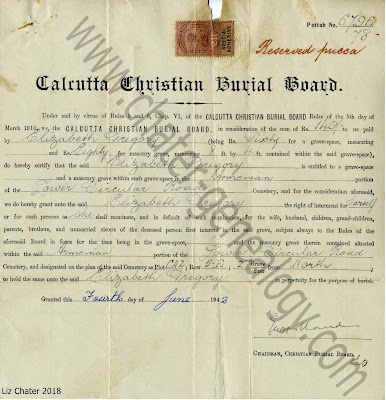 One of the many hundreds of papers I have received in the documents donated to me by Mrs. Sonia John, a 92 year old Armenian in Kolkata was a Pottah certificate issued by the Calcutta Christian Burial Board. It is for the burial plot of Sonia’s grandmother, Elizabeth Martin. I was intrigued by the fact it was made out to Elizabeth Gregory. Confused by this, I continued to look through the papers and I came across this short letter, written by Elizabeth Gregory to Elizabeth Martin in 1964 transferring ownership. 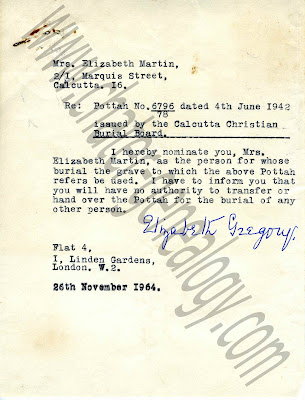 The next natural question was “who was Elizabeth Gregory?”

The answer to that was easily found on the back of the Pottah certificate,

it stated the name of Elizabeth Martin recently buried on the 12th November 1965 and the relationship of the grantee was “friend”.  The two Elizabeth’s were unrelated.

Curious about Elizabeth Gregory, I started to do a little research on her. I could see from her letter of transfer that she lived at 1 Linden Gardens, London in 1964. On checking the voters list for the 1960s[1] I not only found Elizabeth Gregory, I also found a Mary and George A.V. Gregory living at the same address. Knowing that trying to find the correct “Mary Gregory” would be almost impossible, I decided to see if I could find any reference to George A.V. Gregory. There in the baptism records for Rangoon India in 1936[2] was George Aramais Vivian Gregory.

George’s father was Simon Joseph Gregory, I found his grave in my cemetery records for India.[3]   Simon had been born on 17 February 1902 in Tehran and died in Calcutta on 24 March 1942. His wife Elizabeth Gregory was the author of the above transfer letter. She had been born in Calcutta on 6 December 1906[4] and I quickly found her death record for August 2004[5] in London. It helpfully had her date of birth on it, and as it matched exactly to that recorded in the Armenian Church records, I was confident I had found the correct Elizabeth Gregory.

Elizabeth and her son George had left Calcutta in July 1947[6] during the disturbances in India, and prior to partition in August that year. They sailed from Bombay to Liverpool on the ship ‘Cilicia’, the name would not have been lost on her, it was an Armenian Kingdom. Family records indicate that George died in Herefordshire in 2008.

As a friend of Elizabeth Martin, Elizabeth Gregory transferred the Pottah she had reserved for her own burial right next to her husband Simon Joseph Gregory in the Old Armenian Cemetery in the Lower Circular Road. One can only surmise that Elizabeth Martin must have asked her friend if she would be willing to transfer the plot now that Elizabeth Gregory was settled in the UK.  Elizabeth Martin obviously wanted to be buried as close to her own late husband, Jordan Martin who had died in 1953 and had been buried in the same cemetery just a few plots away. You can read the remarkable story about Jordan Martin being a spy for the British in an earlier blog by following this link.

Thanks to Elizabeth Gregory, instead of husband and wife lying side by side, two family friends do instead.