Two anonymous Armenian burials and an Armenian Bishop in Bombay in 1810. No other record exists today for these long forgotten individuals. This is a sanitised return with no further detail as to where and what circumstances they were buried. An unknown Armenian man buried on the 9th October the next day an Armenian Bishop named Mackertich and later in the month on the 28th another Armenian name unknown.

Lest we forget.
Posted by Chater Genealogy at 16:42 No comments:

David Aviet David founder of the Davidian Girls' School in Calcutta had no immediate family of his own to leave his estate to when he died in 1936. However, he had a brother Elias who had 4 daughters and a cousin Tigranes who had 2 daughters and a son. David wrote his will on the 3 May 1913 in which he gave his Lime business known as “Dyers Lime” to his brother Elias and his wife Nanajan and also to his cousin Tigranes and his wife Diana. He also gave to them all his “landed properties at Calcutta Bombay and Allahabad”. In 1913 David Aviet David wishes the “rents profits and income” to be split into 2 halves. One half for the benefit of La Martiniere School Calcutta “and as to the other half thereof as follows:

As I have already disposed of the whole of such income rents and profits I hereby revoke the bequests to the churches institutions schools and hospitals named below except the Armenian College Calcutta which will benefit as provided above only.  The bequests to the following are therefore revoked altogether namely: to the 1. Church of Sourp Astwatzatzin in maidan Julfa and Ispahan 2. Church of Gregor Lansavoritch in Shinakam Thagh Julfa Ispahan or church of St. Gregory the Illuminator 3. Ghedronakhan Deebrotzh or the Armenian central School Julfa Ispahan Persia 4. Church Missionary Society School Julfa Ispahan Persia 5. Church of St. Nazareth in Calcutta 6. St. Peters Church in Bombay 7. Church missionary and Societys’ Hospital Ispahan Persia.”.

In his second codicil to his will dated 2 October 1924 he revokes his bequest of the Lime Business and also “the charitable and educational trust for Armenian boys and girls”……..he goes on to explain

“I now provide that out of the rents profits and income of the said properties money and securities and the investments thereof my executor and trustee shall pay a monthly sum of Rupees five hundred to my brother Eghia Aviet David during his life as well as the monthly sums provided in my will for his children and the children of my cousin Tigranes Ratheus David and subject to the payment of such monthly sums I give all such properties money and securities and the investments thereof both capital and income to the Davidian Girls School which has now been founded and established by me in Calcutta and endowed by an indenture of settlement dated the twenty sixth day of September one thousand nine hundred and twenty four of which the official trustee the trustee so as to form part of the endowment fund to be held on the trusts thereof.”

In his third and last codicil dated 22 June 1928 he revoked the legacy to his cousin’s daughter and also the legacy to the Armenian Church at Bombay because “I am arranging to make a provision for it in a Deed of Trust.”

Turning now to the family generally. It would appear the families of Elias (David’s brother) and Tigranes (David’s cousin) went in completely different directions. I have found that two of Elias’s daughters married in India, Rose married J.M. Nadjarian in 1919, (curiously at St. Andrew’s Church Calcutta) and who sponsored the commissioning of the bust of David Aviet David as well as designing the pedestal. Hymanoosh married Martin A. Martin in Allahabad Holy Trinity Church in 1923, the other two daughters of Elias I am still working on. 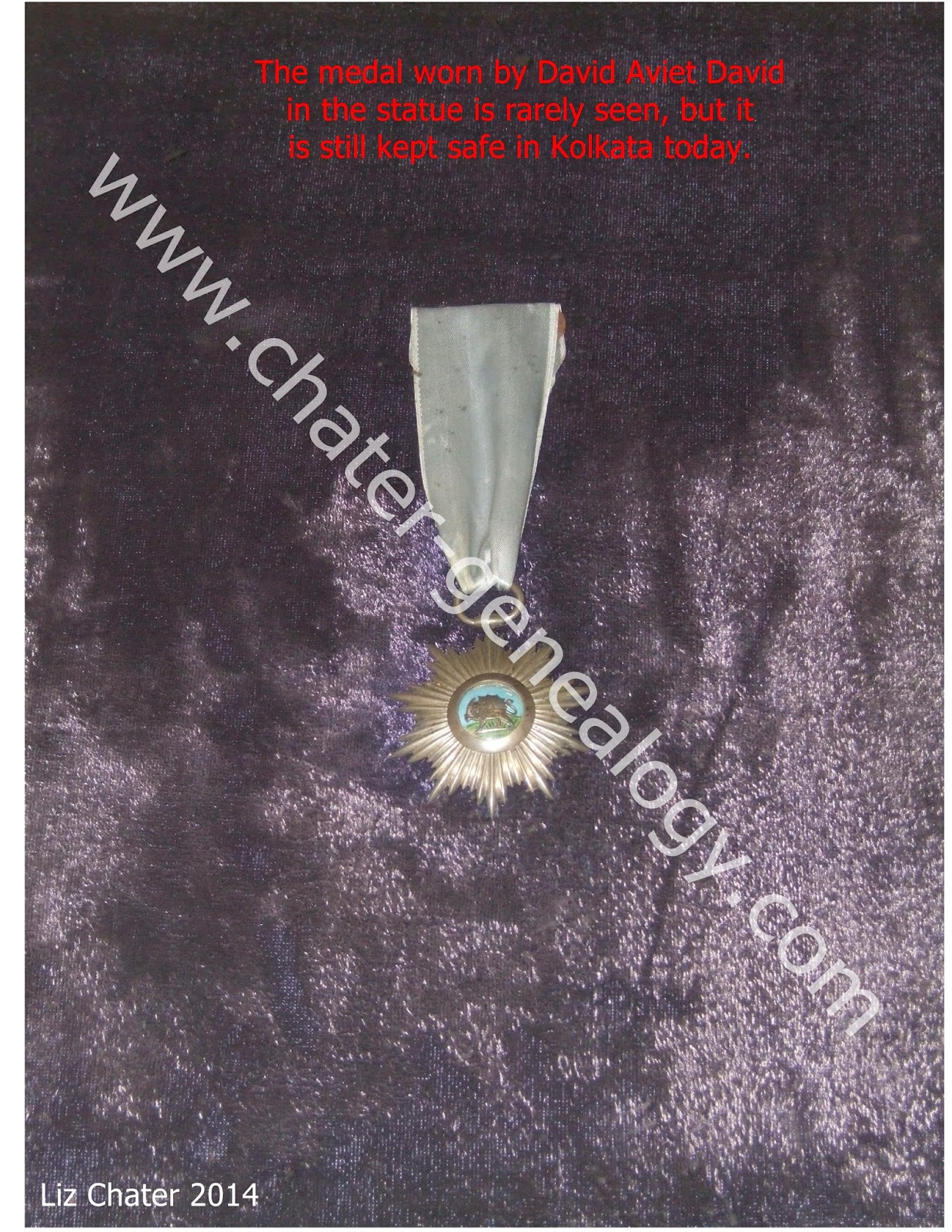 Moving on to the family of David’s cousin Tigranes. His youngest daughter Muriel was the first of the two daughters to marry. She married in 1924 to an Englishman, Lieutenant Cecil Chadwick at Pachmarhi in India.


It would appear that for the sake of integration Tigranes name was anglicised on the marriage record to Thomas Richard David. Lieut. Chadwick had been born in Dewsbury Yorkshire and his family had a deep affiliation to the British army. As I researched his career, it was therefore no surprise to find that he rose quickly and successfully through the ranks of the military. He Muriel and their daughter are recorded on passenger lists travelling to and from Egypt where he was based. He retired as a Brigadier and in the course of his career was awarded a C.B.E. and they became known as Brigadier Sir Cecil and Lady Muriel Chadwick.

His career can be summarised as follows:

It would seem that after the death of Tigranes in 1927 in Allahabad his widow Rose and eldest daughter Dorothy moved to the UK to be close to Muriel and Cecil. Rose died on the 28 January 1944 in London, administration of her estate was granted to Muriel. Dorothy had married in 1926 to Francis Manuel a bank manager with the Allahabad Bank they too settled in the UK seeing the rest of their days out in Littlehampton in Sussex where Francis died in 1952 and Dorothy in 1980. They had one son.

Having searched the passenger lists neither Muriel nor Dorothy can be traced as having gone back to Calcutta to visit their Armenian cousins and likewise I cannot find any record of the cousins visiting them in England. It is quite likely they simply lost touch because of the way their lives had completely diverted away from India.

Muriel and Dorothy were so very much part of David Aviet David’s Armenian world in their youth. Had he not sold the Lime Business to fund the Davidian Girls’ School, Muriel and Dorothy may well have stayed in India and managed it as per David’s original will. The Davidian Girl’s School has educated and enlightened many a child. India may have lost a branch of the David family in Muriel and Dorothy their roots from Julfa going back centuries but it gained a school that has educated numerous children to fine upstanding adults who are now dispersed all around the world.

Posted by Chater Genealogy at 17:47 No comments: 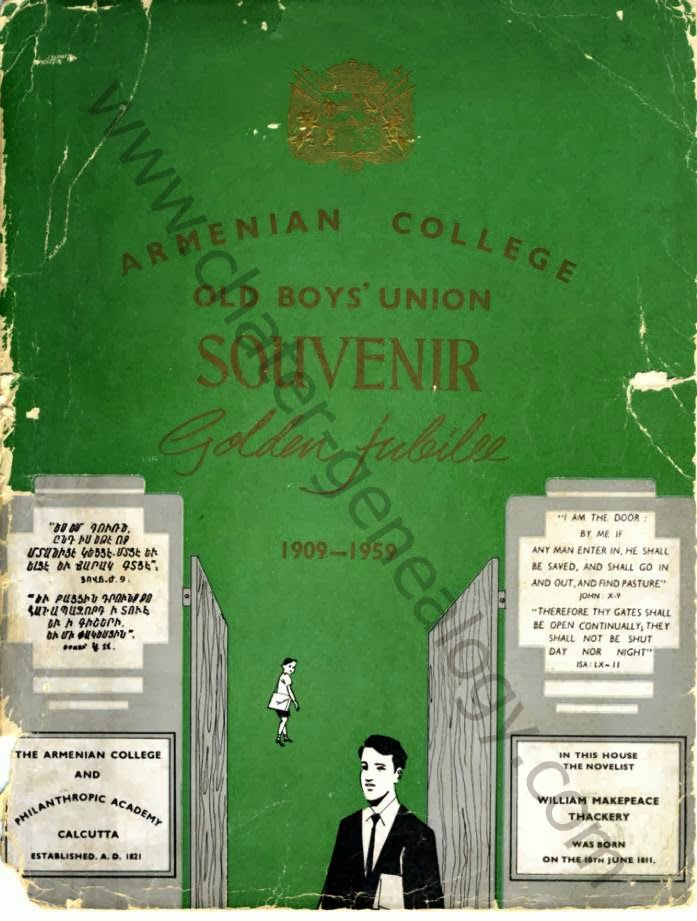 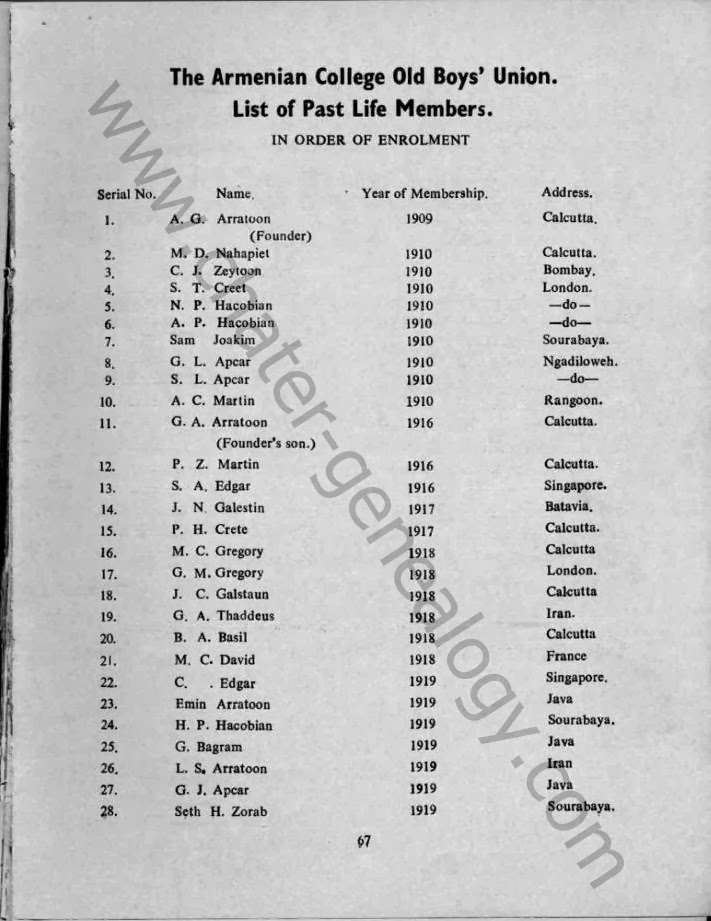 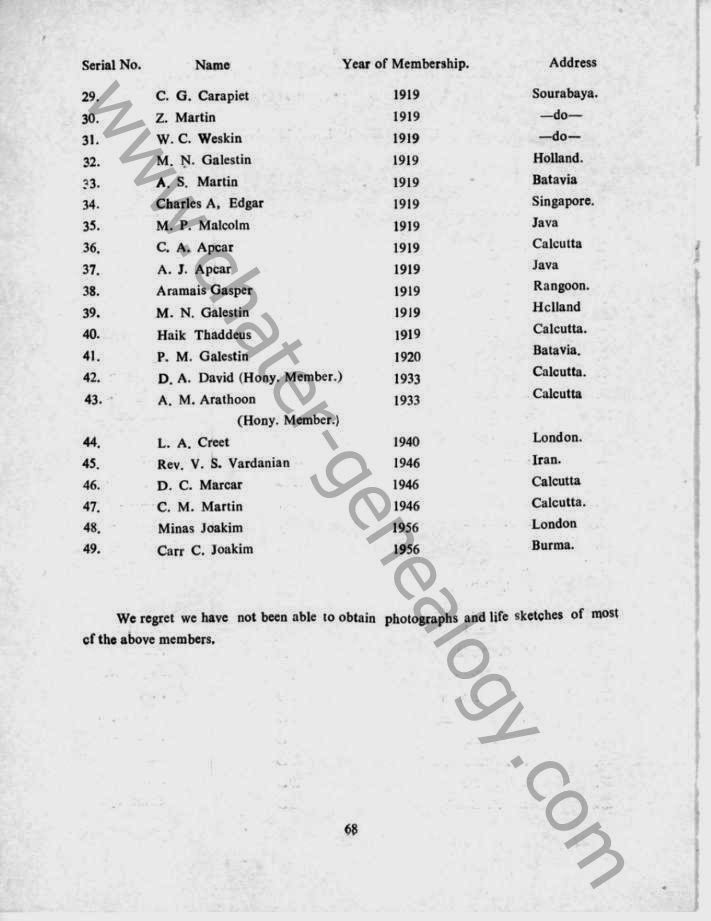 Posted by Chater Genealogy at 19:59 No comments:

Repairs To A Monument: A Stonemason With A Sense Of Humour


Some years ago I was in Dorset and I found this wonderful stone inscribed with a lot of jobs the stonemason had completed. One of the inscriptions on this stone says:

"Revived flames of hell put new tail on the devil mended his left hoof and did several odd jobs for the dammed."


For my Armenian friends there's one that says "decorated Noah's Ark". Presumably before he Sailed for Ararat. 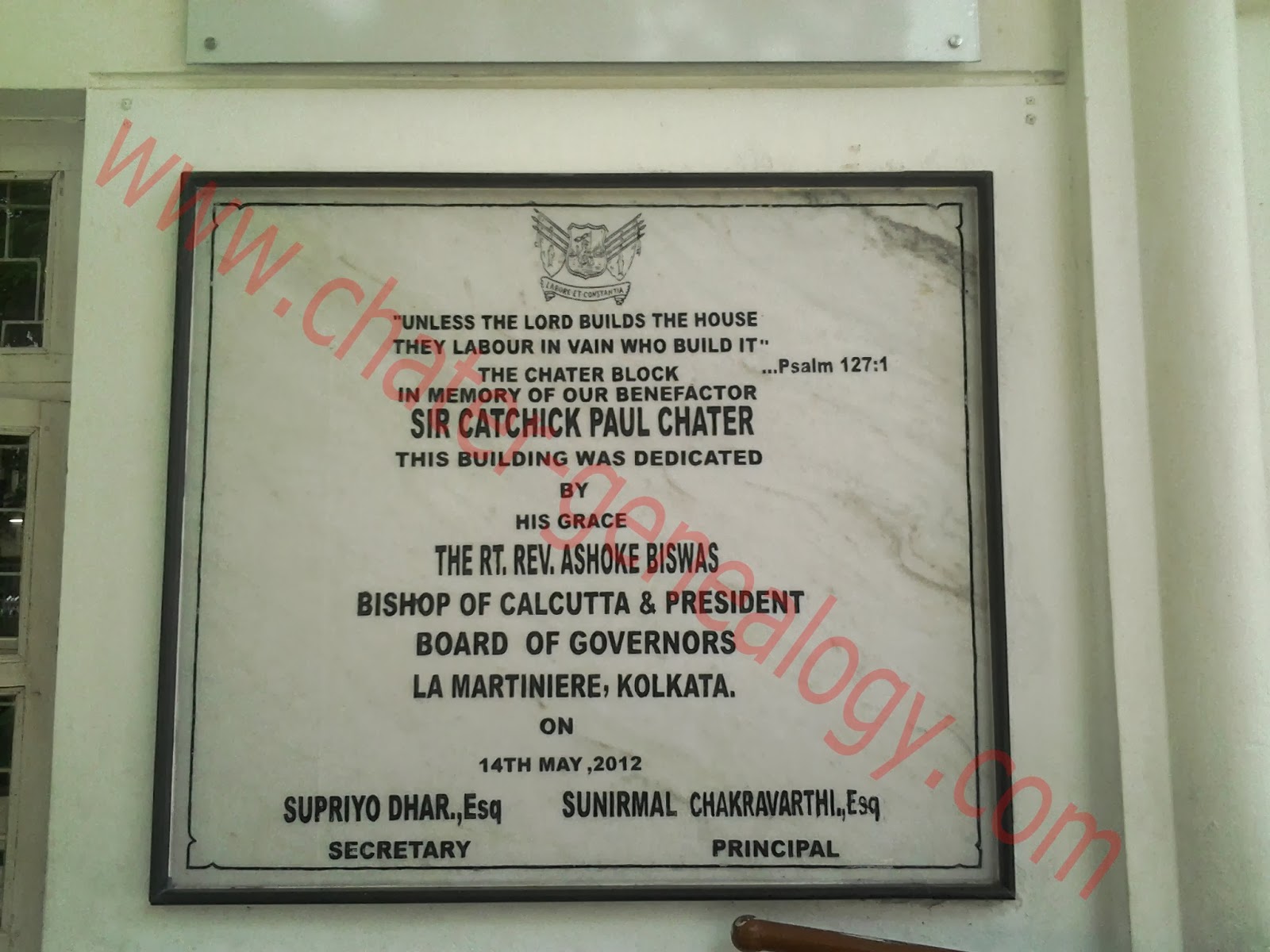 This is the commemoration stone of one of the new school blocks at La Martiniere school Kolkata in perpetual recognition of Sir Paul Chater's financial contribution which allowed the school to stay open in the 1920's and continues to flourish today. A second school block of the same type was also named after Claude Martin the founder of La Martiniere.

It is indeed a testament to La Martiniere School and each successive head master that they never allow the names of their founder and their benefactor to get lost in the annals of time. They appear PROUD to carry the Martin and Chater names on a daily basis in the school prayer. It is nice they have named one of their new school constructions after Sir Paul. It is here in the 1850's he attended and gained the education required to carry him through his pioneering and innovative career as a leading business figure in Hong Kong and South East Asia.
Posted by Chater Genealogy at 19:24 No comments:

The Apcar Line ship,  'Arratoon Apcar' was built in Glasgow. Here is a newspaper snippet reporting that it was conducting sea trials after launch in 1861.  Later in 1863 it is commandeered by the military for use in New Zealand. 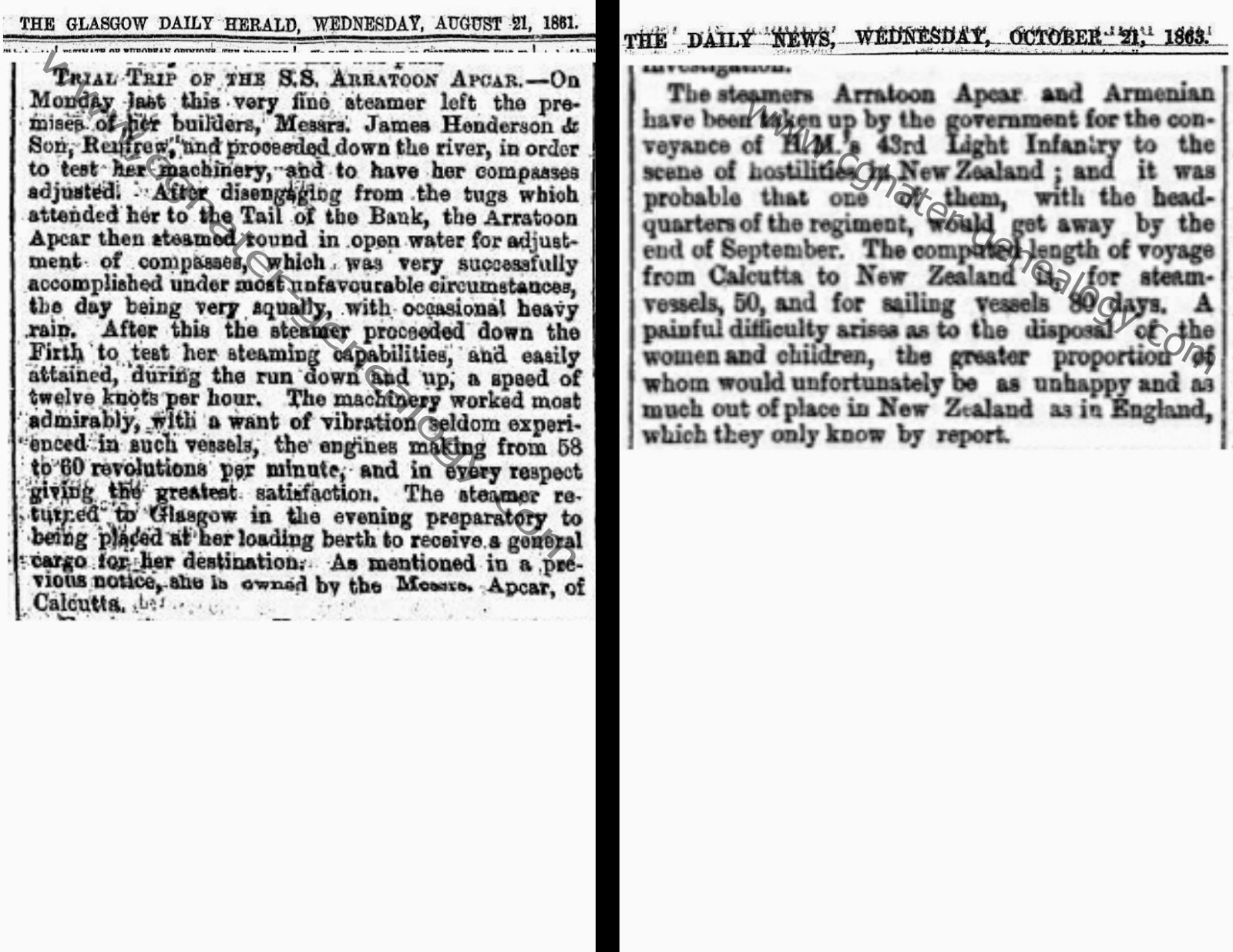 Posted by Chater Genealogy at 19:09 No comments:

Armenian From Madras: 1808 Sarquis Agavelly, An Indian Armenian Lost In the Passage of Time.


He may have passed but his legacy lives on in the 21st Century in a small quiet church in Chennai.

It would appear that it is a rather overlooked fact that a Madras Armenian built the pulpit at the church at St. Thomas's Mount, Chennai which is a national shrine.


“…….It is my will and desire that on my decease and after the performance of all the ceremonies rites ordained by the Armenian church my body to be taken to the church at St. Thomas’s Mount and there buried under the pulpit which was made by my Uncle the late Sarquis Agavelly and a tomb stone be put on my grave with proper inscription in the Armenian and Latin languages……….”

The will
The statement
The church
The pulpit
The grave

The more well known and popular fact is that the Madras Armenian Petrus Woskan (aka Uscan) built the steps at St. Thomas Mount but who knew its pulpit was made by the hand of another Armenian?
Posted by Chater Genealogy at 18:10 No comments:


MADRAS LETTER
VESTIGES OF A GREAT PAST

The celebration of a Requiem Mass at St. Mary’s Armenian Church on Sunday the 11th  [December 1927] instant in honour of the General Andranik, who died in America on August 31, serves to remind us, of the existence to this day the city of a small but rapidly disappearing community of Armenians, the descendants of a once flourishing class who possessed vast wealth and made generous public benefactions.

It was a fitting tribute that this small community paid on Sunday to a great Armenian solider who did much to sustain the morale of the small and badly equipped Armenian Army during the great war.  There are many vestiges in Madras City and its suburbs of the commercial enterprise and prosperity of the Armenians and of their glorious past.  Armenian Street, in which the Church is situated, is no longer occupied by Armenians as in days of yore, but there has grown up in it numerous commercial houses and trading establishments and today it is the centre of much business activity.

In Royapuram there is an important road called Arathoon Road, named after a one-time wealthy Armenian gentleman, whose remote descendants can still be traced in Madras.  There is an important bridge on the road to St. Thomas’ Mount, near the Little Mount Church, which owes its existence to the generous benefaction of an Armenian name Petrus Uscan, who constructed it in the year 1726, and which to this day, is a standing example the substantial type of structures guilt in those early days.  The same gentleman, who possessed a markedly religious turn of mind, was responsible also for constructing the long flight of inclined planes and solid stone steps which conduct Roman Catholic pilgrims to the ancient church situated at the summit of St. Thomas’s Mount.

Posted by Chater Genealogy at 20:40 No comments: