Today is the anniversary of the death of Sir Catchick Paul Chater. A man ahead of his time, a visionary 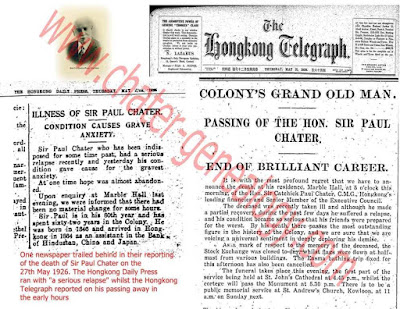 At the time of Sir Paul’s death, it was suggested on more than one occasion that there should be some sort of memorial or statue in remembrance of his life and contribution to the development of Hong Kong. One anonymous newspaper contributor wrote:

“……By the passing of Sir Paul Chater, the colony has sustained an immeasurable loss and the memory of this, one of the most illustrious citizens of his time will forever be held in the history and future development of this Colony.  As a resident of the Colony, the late Sir Paul Chater had given his full time and money for the general welfare of the island and its inhabitants and stood a noble example of a generous benefactor, a businessman of marked ability, and last but not least, a man born with the true virtues and an Empire Patriot.   It is only fitting that as a recognition of Sir Paul’s wonderful realization of one’s duty of citizenship that a life-size statue of Sir Paul should be put up in an appropriate place.  I would suggest that as Sir Paul was actually the citizen who rendered the greatest service in the public affairs of the Colony, the cost of erection of the statue should be borne by the Government as a permanent memorial to her most noble citizen and benefactor”.

In 1927, a year after Chater died, his staunch and loyal friend Noel Croucher, himself holding a position in society of influence and authority, pushed Hong Kong’s LegCo hard to have a statue of the man erected, but even Croucher was unsuccessful in getting the Grand Old Man permanently remembered in the Statue Square.

In February 1928, the annual report by the Kowloon Residents’ Association  stated: “a committee has been formed for the purpose of erecting a statue in memory of the late Sir Paul Chater, and they have suggested that as Kowloon has been built up largely by the foresight and keen interest of Sir Paul, it is fitting and proper that his statue be erected in Kowloon, to commemorate the fact that we owe a debt to his memory which is immeasurable.  It was also felt that the statue might form the centre around which a more dignified approach might be made to the gateway of the Kowloon Peninsular.”

Unfortunately, no further action was taken.

However, it was in 2009 that Hongkong Land, the company that Sir Paul created in 1889 in conjunction with John Bell-Irving Chairman of Jardines at the time, commissioned the first real tribute that Hong Kong had made towards him. A bust and a wall plaque were placed in Chater House in Central Hong Kong in remembrance and gratitude to his memory.


In 2017, in the grounds of the school that gave Sir Paul the preparation and education he used to build the extraordinary life he had, La Martiniere is also the proud custodian of a Sir Paul Chater bust. Created and unveiled in a joint collaboration with the relatively newly formed and dynamic Indo-Armenia Friendship NGO, along with ex student of La Martiniere Girls’ School and a stalwart member of the Armenian community of Kolkata, Mrs. Sonia John.  The result of this unique team work stands tall in the grounds for all to admire. Sir Paul Chater has once again returned to his beloved La Martiniere School and will forever look over the current and all future students who go there to study for a better life.

Those of you who know about Sir Paul Chater will know he owned a unique and priceless collection of art, as well as Chinese and Japanese porcelain and bizenware. You may also know that he was a successful race horse owner in Hong Kong with a top class stable that many admired. His triumphs on the race course became legendary, particularly with the incredible record of Derby wins he gained.  Eleven Hong Kong Derby wins jointly with his business partner and best friend Sir Hormusjee Mody, and a further eight Hong Kong Derby winners solely in his own name.

No other owner has been able to attain the heady heights of 19 Hong Kong Derby wins in their career.  In his trophy room in Marble Hall, his tables must have been groaning under the weight of silver they were displaying.

But what of that silver? After he died, he left his collection of art to the government of Hong Kong, perhaps hoping they would create a museum. Extraordinarily, in 1936 it was reported that: “…..portions of the household effects bequeathed to the Colony by the late Sir Paul Chater have in turn been bequeathed by the Hongkong Government to various charitable organisations as they are considered worthless from a collection point of view…………”

After years of being loved and admired, parts of Sir Paul Chater’s home were deemed “worthless”.
In the last 93 years, there have been no sightings of any of the silverware Sir Paul Chater once owned. That is, until now.

At a recent auction sale this beautiful silver tray, inscribed to Sir Paul Chater came on to the market. I was fortunate enough to be able to purchase it. A gift from the 93rd Burma Infantry to Sir Paul in 1904.

Although it has always been thought that his art collection and silverware never made it after the Japanese invaded Hong Kong during WW2, I can safely say, at least one piece of silver did indeed make it and I am very happy to share the photograph here.

Posted by Chater Genealogy at 20:05