Those of you interested in the Armenian community of Rangoon will be familiar with the church name of St. John the Baptist. What is less well known, is the name of the original church. The following may be something my Armenian genealogy friends and followers may find useful.

Quite by chance, I was reviewing an issue of the Armenian paper Azgaser with my good friend and Indio-Armenia co-ordinator, Karen Mkrtchyan, whose passion for anything India Armenian related is equal, if not more than my own.  The publication was dated March 1849. Inside was a copy of a letter sent to Ter Carapiet Aviet Hakobian by the leading members of the Armenian community in Rangoon dated 19 January, 1849, thanking him for his service with the community for the last 5 years. It also went on to mention that Ter Harutyun Hakobian Ter Karapietian has arrived to replace him as the parish priest. But the most exciting part for me, was the fact this is the church the community used prior to the devastating fire of 1850, when it, and all that it contained, was lost in that ferocious inferno. The original valuable church registers would have gone up in flames, removing any permanent record of who made up the early Armenian community in Rangoon. See an earlier story I wrote on Elizabeth Carapiet Jacob.

Colesworthy Grant sketched the spire of the Armenian Church Rangoon, built of wood, reputedly in 1766. It is the only known sketch of the church prior to the fire in 1850.  From his book: “A Rough Trip to Rangoon in 1846”. 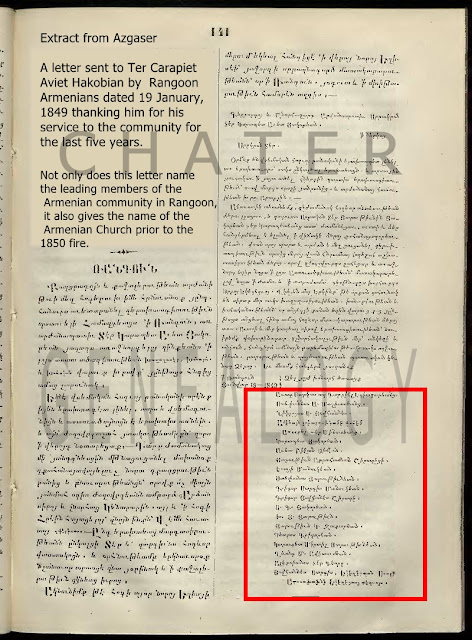 Precious pieces of history found in a thank-you letter.

1.       The names of two serving priests who pre-date anything previously known about Rangoon

2.       The names of leading members of the Armenian community in Rangoon

3.       The full name of the Armenian Church Rangoon, which, until now, had been lost in the passage of time.

Those members of the community were: [anglicized names in square brackets]

This is unequivocal evidence the Armenian Church Rangoon, prior to the St. John The Baptist Church name, was called Holy Mother of God. It could be said that it was named after what is now the oldest surviving church in Yerevan.

From a brief note of gratitude from the members of the community, thanking Ter Carapiet for his service with them in the past 5 years, and from which they have largely benefited; they went on to expressed their heartfelt gratitude and passed on their good wishes to him for his future endeavours; so much new and important information has been gleaned.

With the original registers destroyed in 1850, the community started new registers when the replacement church was built in 1862. Bad luck would strike this church again 80 years later and the newly created original registers for St. John the Baptist Church were also destroyed, this time during WW2.  Between 1942 and 1946 the community was evacuated from Rangoon owing to the war.  There was no church or priest and the damaged church was reconstructed and consecrated in June 1948. In the 1950’s, Johannes Stephen valiantly attempted to re-create the birth/baptism, marriage and death/burial registers purely from the recollections and physical contributions of the remaining members of the Armenian Community in Rangoon, as well as those who had settled in other places around the world. There are, of course, many gaps in the records, making it frustrating for family history researchers. Had it not been for this third attempt to record the community, it would be impossible to know who had ever lived and worked in Rangoon from the Armenian community.

For those interested, I have recently donated some transcriptions of the death/burial records, which form part of there-constructed register created by Johannes Stephen, for the Armenian community of Rangoon. These have been given to FIBIS and can be found here.

In addition, about 15 years ago, I donated Armenian baptism transcriptions and translations to FIBIS for the Armenian community of Calcutta for the dates 1793-1859, extracted by me from the original registers.These can be found here.

Posted by Chater Genealogy at 18:53