A Misleading Apcar Line - Charles Apcar Was Not Armenian


This is to show how easily one can be led in completely the wrong direction. Things aren’t always what they seem.

Whilst researching a branch of the Apcar family with India connections I came across a Charles Apcar who had been educated at Charterhouse School in the Surrey in the UK. Being sent back to the UK from India was not unusual, hundreds of children born in India were educated in England, so finding him at Charterhouse was no surprise. Their Roll of Honour page for WW1 states: “Charles Apcar. Rifleman. Born 17th May 1894, only son of John Alexander Apcar and Ida Apcar, of Calcutta, India. He was at Charterhouse [L] 1908 - 1912. He enlisted in the London Regiment (London Rifle Brigade) and served with 5th Bn. He died on 8th November 1918 His grave is in the churchyard at Outrijve in Belgium, close to the east end of the church.” Of course I was keen to get his full details as well as those of his parents John Alexander Apcar and Ida. When you read “of Calcutta, India” you would naturally assume that is where he was born. I was struggling to find his birth so I decided to see if I could find the marriage of John Alexander Apcar and Ida. But what was her maiden name? I did not know. 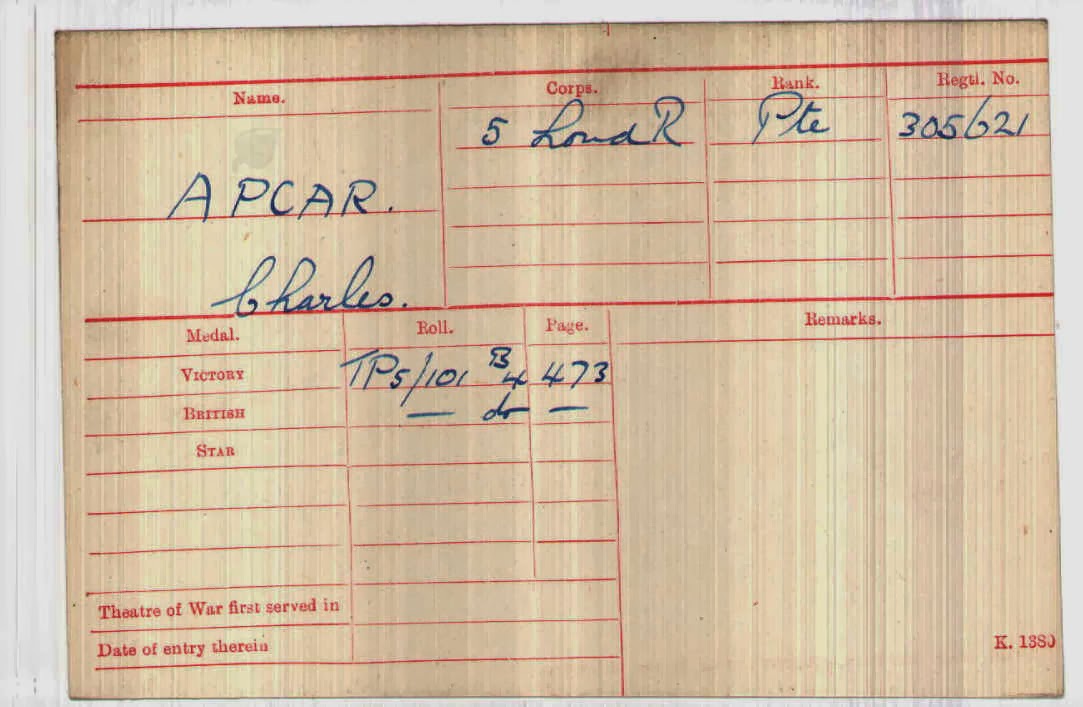 Searching the birth marriages and deaths for John and Ida’s marriage, it appeared they married in the second quarter (Q2) 1899 in London. The records indicate that Ida had previously been married to Edward de Pinto de Soveral also know as Vicomte de Pinto and Ida had previously held the title of Vicomtesse de Pinto. Furthermore, records show that Ida started divorce proceedings against Edward de Pinto in 1888, having only married him a year before in London. She was seeking an annulment due to his inability to consummate the marriage. 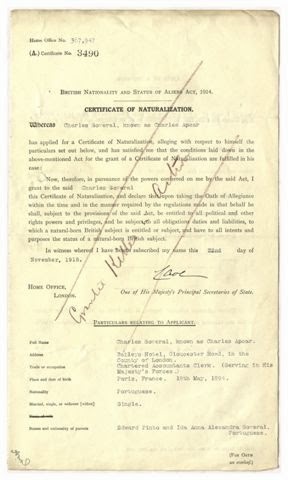 It is unclear if the divorce was ever finalised but now, on a hunch, I searched for Charles de Pinto de Soveral and his baptism record in Hounslow, London showed up on 5th August 1894. This told me immediately that Charles Apcar listed as “only son of John Alexander Apcar and Ida Apcar” in the Charterhouse School listing was incorrect. Now to find his place of birth, quite possibly in the UK, but never assume anything. Since he died in WW1 in France his military record will have that detail. Looking at the records “UK, Soldiers Died in the Great War, 1914-1919” I could see that he was born in Paris. Now I needed confirmation of the date and I could be 100% certain that Charles Apcar of Charterhouse was actually Charles de Pinto de Soveral. That confirmation came in a stroke of luck. Whilst searching the National Archives I came across his naturalisation application. “Charles Soveral also known as Charles Apcar”. On it was his date of birth 17th May 1894, in Paris, France of Portuguese nationality and on the application for naturalisation in the UK were the names of his parents Edward de Pinto and Ida Anna Alexander Soveral Vicomtesse. Because he died on the 7 November 1919 he never got the notification that his naturalisation application was granted on the 22 November 1919. Ida died in Q3 1920 in London and John Alexander Apcar died 8 February 1921 in St. Leonard’s Sussex. They did not have any children of their own but John Apcar treated Charles as his own son. No records can be found for Edward de Pinto and as he came from a long illustrious family in Portugal I would imagine that he ended up there. He either died before 1899 or finalised the divorce before 1899 because Ida would not have been free to marry John Apcar otherwise. 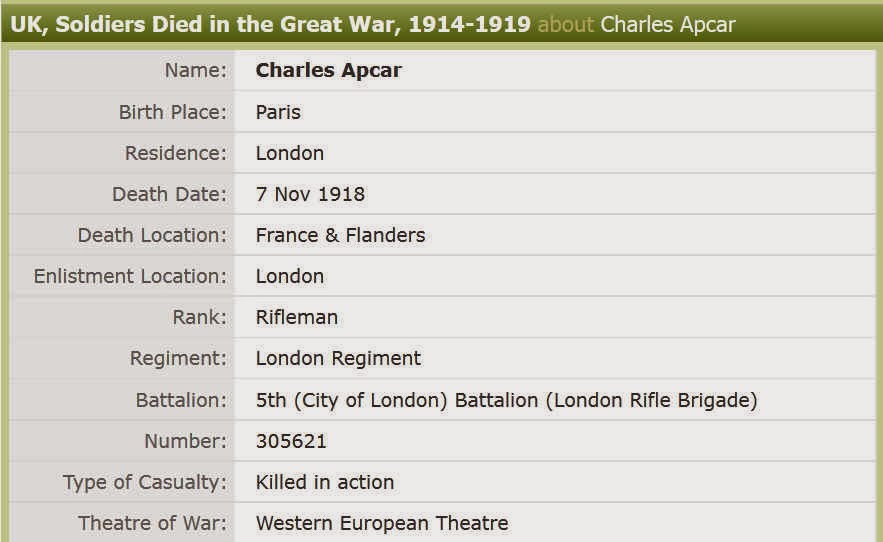 Charles Apcar, of Portuguese descent, born in France, educated in England died fighting for the country he wanted to belong to was not Armenian. 17 May 1894 – 8 November 1919
Posted by Chater Genealogy at 18:05